Have you heard of Pergamano®?  This the trade name for a company that sells parchment craft supplies.  Parchment Craft is an old craft which is basically a combination of dry embossing and paper piercing (or pin pricking) on parchment paper.  Parchment paper is a very heavy vellum and these techniques yield the most amazingly beautiful and exquisite designs.  You only have to do a "Google" search to see the results.  The challenge that faces us for this type of craft however, is time.  It's definitely not something that can be done quickly.  A number of years ago Fiskars® developed a system whereby dry embossing could be accomplished quickly and easily using a two-part stencil.  The paper you wanted to emboss was sandwiched between two stencils.  The top stencil was used as a guide for the embossing tool and because the identical stencil was underneath all kinds of paper could be embossed.

Based on this technique, Marie Browning, a CHA Designer from Canada, developed a three-part stencil system whereby parchment paper could not only be embossed, but designs could also be pierced.  Parchamoré was successfully sold for a number of years by Fiskars® using their Mini Shape Boss platform.

As you read earlier, I've been re-organizing my craft room and I found enough supplies to put together 3 Parchment Craft kits for Craft Lane Designs.  Each of the kits has everything you need to hopefully inspire you to dive into some parchment crafting.  Here's a sample of what I made with the Rose and the Bow, three-part stencils.  For this project I cut the designs apart and layered the pieces to create dimension like we did in the 70's with Paper Tole projects: 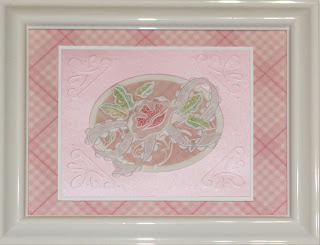 The parchment rose is at the center and the corners were embossed on pink pearl cardstock with the two part stencil.  It's neither as exquisite nor as beautiful as the samples you'll find on the internet, but it only took an hour!  Y'all come back now!

Posted by Julie McGuffee at 6:19 PM