Jean and I are heading out for Chicago tomorrow morning. It's about 15 hours on the road, so we'll spend the night somewhere and get there Monday afternoon. The trade show is Tuesday-Thursday and the consumer show is on Friday and Saturday. Our workshops are on Saturday at 12:30 and 5:30pm. You can also find me on Friday at noon at the Craft Academy when I'll be showing samples and telling you about all the new products I saw at the trade show, then at 1pm I'll be at the Westcott booth to judge "America's Top Crafter", which you'll be able to watch later on YouTube. At 2pm I'll be teaching a Make It/Take It at the Michaels booth. After that....... a nice relaxed dinner and getting "goodie" bags ready for the workshops. We've had SO many manufacturers offer to donate product for these, it'll be worth coming to the class just to walk out with a "Little Yellow Bicycle" bag full of goodies. I'll also be at the Super Crop on Saturday afternoon at 3:30pm and have Scrapbook Memories show DVDs to give away!

Gotta run - still working on project sheets to put on a CD for everyone in the Christmas Crafts class. Jean and I will both be in both classes, but Christmas Crafts is "my baby" so to speak. Hope to see you there. BTW: I have a laptop, but it's not set up for the internet, so no blog or FB entries till I get back around August 4th. Sorry, but I'll have LOTS to share then, so check back!

"Just Crafty Me" is the title of my friend's blog. Jean and I have been in business together since July 4th, 1996. Before that we both authored craft books for a local publishing company and worked with manufacturers to develop craft books full of creative ideas using their products.

We've both been crafters all of our lives and before we jumped into the publishing world, which is where we met, we sold our designs at craft shows and in craft malls. Jean is the Queen when it comes to quick and easy crafts. Jean would create 100-500 of the same item to sell, whereas I would only make one and then teach others how to make their own. We were a perfect fit for the business we've built together over the past 14 years. We continue to create and design individually, but also work with manufacturers on product development and as consultants. We are honored to have been recognized individually by the Craft & Hobby Association as "one of the brightest and best" in the industry today and our company, Kievlan-McGuffee Design Svcs, is one of the leading consulting companies in our industry. We are unique in that we're a full service company offering not only product development and consulting, but also design, graphic and publishing services "in house". Visit Jean at: www.justcraftyme.com. Enjoy!

Yours truly,
Julie :)
Posted by Julie McGuffee at 2:36 PM No comments:

Something odd happened today. We grilled on the porch today and, of course, the little ones wanted to peek at the baby birds. All was well. They still sleep a lot and we hardly see any activity, but they seem to have all their feathers now, at least as far as I can tell. However, early this evening everyone had gone home and we'd finished picking up, etc. I looked in the nest and there they weren't - gone!! All four of them!! Nowhere to be found - and there aren't a lot of places to hide. I must admit I felt a bit let down. I was hoping to capture them perched on the edge of the pot, learning to fly, or whatever it is that little birds do. I certainly never expected them to be huddled together one minute and gone the next. Totally - weird. Oh well.........

Hope you had a great weekend!

Yours truly,
Julie :)
Posted by Julie McGuffee at 8:43 PM No comments:

This blog has definitely become "one for the birds" lately - very boring, unless, of course, you're a closet ornithologist. Life in the craft lane is definitely not boring, but I seem to be stuck in an overlook lately and unfortunately, I've neglected the creative side of my blog. Don't give up on me yet, this just happens to be a very busy time.

This week I've been working on the supplies for my Christmas Crafts workshop at the CHA show in Chicago. It's amazing how time consuming it can be. Not only gathering the supplies, but making sure they're cut to size, drilled, etc. to make it easy to assemble the projects in class. I've also been working on projects for a book, which, together with step by step instructions, also took up much more time than expected.

The CHA trade show is back in Chicago this summer. You may remember photos from last year when we were in Orlando. My friend, Jean and I will be leaving next Sunday and won't be back till around August 4th. I don't usually blog when I'm away from home, but I'll try to post some highlights if possible. There'll be lots to share though when I get back. One will be an important announcement about Scrapbook Memories and I also have something else up my creative sleeve to tell you about........ so stay tuned, it's going to be fun!

In the meantime here are some photos from the Dallas Gift Market. A sneak peak into what the retailers are being offered for their stores for the holidays and beyond.

Snowmen continue to melt our hearts, but penguins have apparently returned to Madagascar. 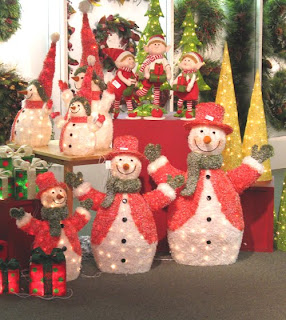 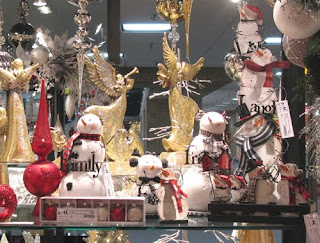 I love the bright cheery colors on these guys below: 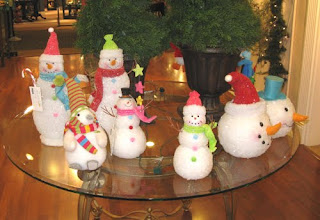 but there are still plenty of choices for the traditional holiday decorator. 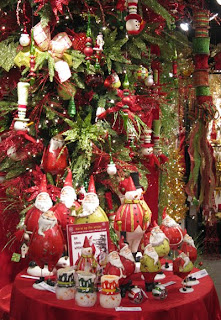 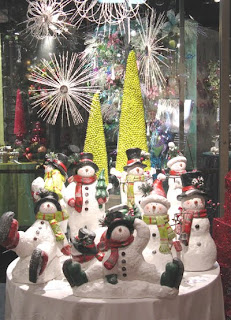 I saw more Elves this year than in the past. Relatives of the Garden Gnome they are following in the family tradition, or maybe they're being influenced by sales of the "Elf on the Shelf". A cute story to be sure, but he's quite a scary looking elf in the story. Not sure I'd want him watching me! I think these guys are much sweeter. 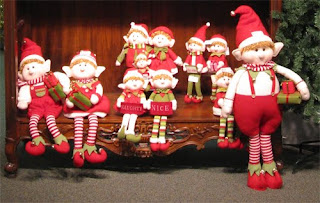 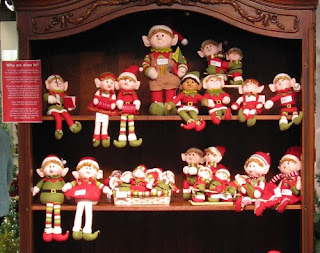 Growing up in England, I was inundated with stories about elves and fairies - we even had a fairy on the top of our Christmas tree. Santa Claus, known to us as Father Christmas, always had a fairy as a helper. Fairies were and still are, quite popular in Australia too. Remember the Fairy Tea Parties? Except for Tinkerbell and her friends, I haven't seen too many here, although there were some Spring Fairies hiding amongst the flowers in one of the showrooms. Check out the photos and see if you can spot them too. 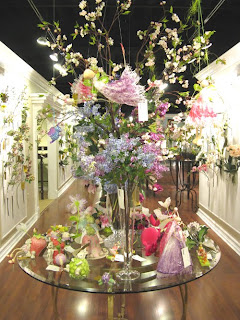 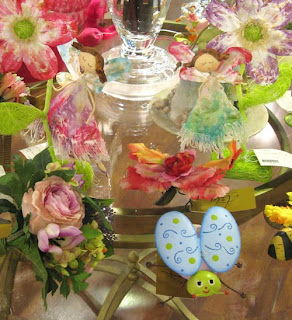 There was lots to see and I'll share more photos in Part II. So check back after the weekend! Have a good one!

Yours truly,
Julie :)
Posted by Julie McGuffee at 8:00 PM No comments:

The babies are growing. They sleep pretty much all the time, but did wiggle a bit yesterday when I watered the plant - very carefully from the other side. Can't let the plant die. As I said at the beginning, my mother-in-law had it for a very, very long time....... Anyway here's some photos I took a few moments ago. Still not much to see, but at least the eyes look like eyes now. 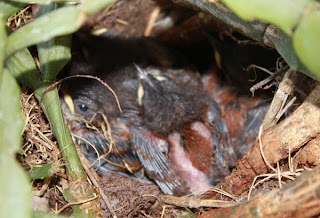 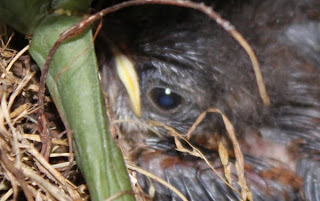 This one definitely has his beady eye on you!
Yours truly,
Julie :)
Posted by Julie McGuffee at 4:44 PM No comments:

It took longer than I ever thought, but all the eggs have now hatched. These aren't the best photos, but I don't want to get too near in case the mommie is scared away and abandons them. I still don't know what kind of birds they are. She's kinda small and brown with no particular markings that I can see. Maybe daddy will come visit at some point........ the males are the good looking ones, right..... I wonder why "birds" was a nickname used by guys for girls......... hmmm. 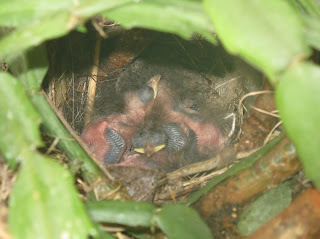 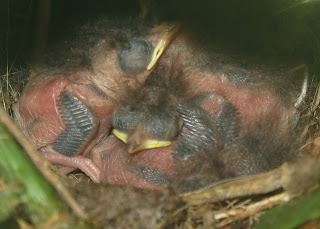 These little guys are all beak and big eyes. I'm sure they'll look much cuter when they're older. I think birds are the only species whose babies aren't cute...... well maybe not.....

Have a great day!

Yours truly,
Julie :)
Posted by Julie McGuffee at 10:44 AM No comments:

Mommie bird hardly left the nest this past week, but I was able to peek in yesterday and 3 of the eggs have hatched. Not much to see except the one egg and pink blobs..... I wasn't even sure they were alive, but I guess they are. I'll probably wait awhile before trying to take photos; they don't look very photogenic at the moment and I don't want to scare the mommie away. The saga continues.

Hope ya'll had a fun and fabulous Fourth!

Yours truly,
Julie :)
Posted by Julie McGuffee at 9:00 AM No comments:

Julie McGuffee
I'm a crafter, an award winning designer, consultant and product developer and have been professionally involved in the Arts & Crafts industry for over 30 years. I've authored over 50 "How To" books on a variety of crafts as well as feature columns in national and international magazines. I've represented manufacturers on QVC, Shop at Home and HSN and was a frequent guest on TV craft shows. For 14 years I was a host for shows on scrapbooking which aired on Public Television stations nationwide. I've always been a "crafter" and love to share how to use and what to make with the amazing tools and products in the Arts & Crafts industry. 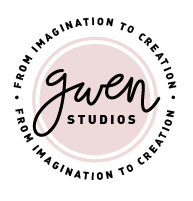