When organizing your photos, a lot will depend on how many photos you have and how long you've been taking them.   To start with, here's a clip from a short interview with Ellen Marden on the set of Scrapbook Memories a couple of years ago.


Ellen had asked us how we organize our photos.  Beth replied that she uploaded her photos once per month to Shutterfly.  For better or for worse I have to admit that I download mine to iPhoto and there they stay.  Deleting any of them is a real challenge, so I have literally thousands.

Digital cameras allow us to take so many photographs without a second thought because we no longer have to worry about the cost of taking rolls of film for printing and developing.  We do however, have to remember to print the ones we could not bear to lose otherwise, as I said on the video, our children and grandchildren will grow up to be jpegs.

So, back to the question, how do we organize our photos?  I've had a camera since I was 11 years old, so I've literally been taking photos for over 50 years.  I love photographs and remember as a child spending hours looking through the photographs my dad took during the time he spent in the Air Sea Rescue branch of the RAF in the early 1940s. 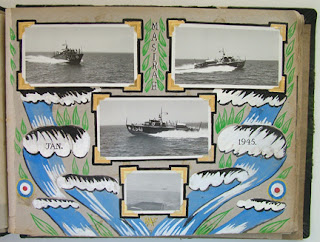 This is a page from the album he made.  I just love how he painted his own background and he even added where and when the photographs were taken.  My dad was a scrapbooker and he didn't even know it.  Scrapbook albums are a great way way to organize and preserve our special memories, but, let's be honest, if we scrapbooked even half of all the photographs we'd  taken, we'd need not only a separate room, but a whole house to store the albums.

Okay, I'm back to organization.  Whether you have tons of actual photos (and slides) dating back to the early 1900's, or just digital photos because you're a lot younger than I am,  you have to organize them and, if they are digital you have to print out the most important ones.  Part of organizing is also recording the names of the people who are in the photos and where and when they were taken.

Here's what I would suggest:

1.  Organize your printed photos by decade up through 1970 or 1990 depending on how many you have.  I'm thinking digital photography didn't become really popular until 2000.  My photos are all in separate photo (shoe) boxes labeled 1920, 1930, 1940, etc and I have a separate box for the photos (and the negatives) that my mother took.

2.  Digital photographs can be broken down by year and month, if you take a lot, and also by event.  For example, my albums in iPhoto would be labeled something like this:
Jan-Jun 2010,
July-Dec 2010
and events would be:
David & Chelsea's Wedding,
Dylan's Graduation,
Jovie's 3rd Birthday,
Disneyworld - 2011, etc.

3.  Each time you upload photos, delete as many as you can, otherwise you will end up with so many, it will be an overwhelming task to sort through them all and you'll keep putting it off.

4.  I also have an album of "Photos to Print".  I drag all the "special" photos in here to be edited and printed then copied to an external drive and a CD.  After backing them up I delete them from the "Photos to Print" album.  I'm not sure about other programs, but any photo that goes into this album is a copy and the original is still maintained in iPhoto.  I transfer photos onto Gold CD's, which are less likely to become damaged than regular CDs.

5.  Reality Check: Computers crash, CD's can be easily damaged and who knows whether or not you'll even be able access information that's on a CD in ten years or so.  Flash drives have become very affordable and they're also a great place to store photos, but again, who knows what we'll be using 10 years from now.  So, printing your photos either individually to store in either a box or album, or in a photo book is still the best solution.  I do have lots of scrapbook pages, but I keep them in page protectors in a 3-Ring album.  I call them my "eye candy for the soul".  The rest will be in digital albums - McGuffee Family Yearbooks  (or Annuals).   I make my own using Photoshop and the Unibind system - I just LOVE their coffee table book type paper which can be printed on both sides.

Well, I think I've waxed eloquent (hopefully) for long enough.  Hope you found this helpful.  Please feel free to ask questions in the comments section and I'll help if I can.   Y'all come back now......

Yours truly,
Julie :)
Posted by Julie McGuffee at 4:53 PM