I've been doing some Spring cleaning this week. I use the term "cleaning" loosely because, from the look of it, I've made a bigger mess than I had originally.  It's always a challenge because I'm a craft hoarder at heart.  I have magazines and catalogs from waaaay back when, which I know I'm going to need at some point.....  Murphy's law, says that if I throw it away today, I'll need it tomorrow.

I just love looking thru old things: photos, catalogs, magazines and tear sheets of projects I created, let's just say forever ago.....  Most of them are dated, but some crafts are timeless.  Here's one of my favourites - Flower Fairies.  Not sure you can read the text on the tear sheets I scanned, but basically I share, that belief in fairies was commonplace during my childhood in England.  Not only did the tooth fairy come to visit, but we always had a fairy at the top of our Christmas tree and it was a fairy who was Father Christmas' sidekick.

In 2000, Miriam Olsen, the editor of Crafts magazine saw one of my flower fairies at my Designer Showcase at an SCD convention.  Not only did she want that particular project, she wanted me to do a whole "Fairies in Bloom" series for the magazine for 2001.  I've often had projects on the cover of magazines, but I have to admit I was blown away when this cover was the feature cover at the HIA  PriMedia Awards show in the Winter of 2001.  (HIA - Hobby Industries of America is now CHA.) The cover was blown up to the size of the wall behind the presentation podium.  Note: The Primedia Awards were like the Oscars for the craft industry.  Here's the magazine cover: 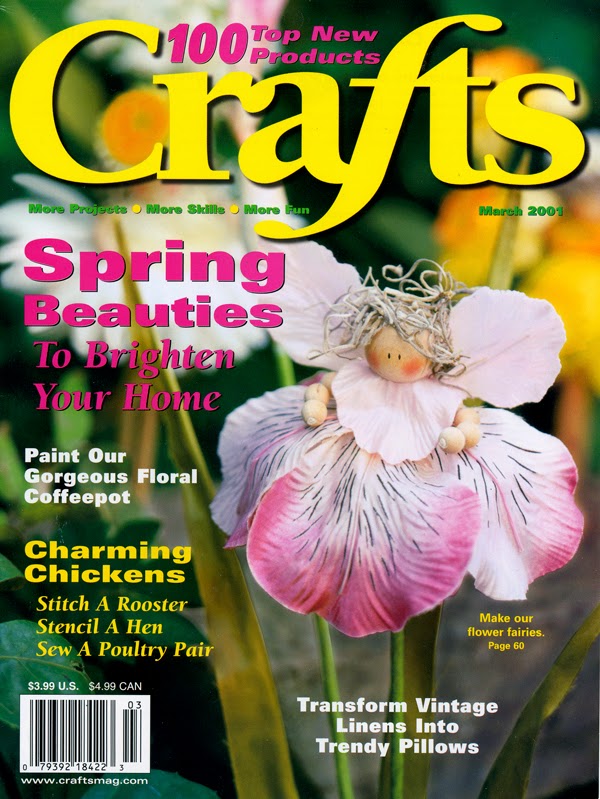 and these are the Spring Fairy projects: 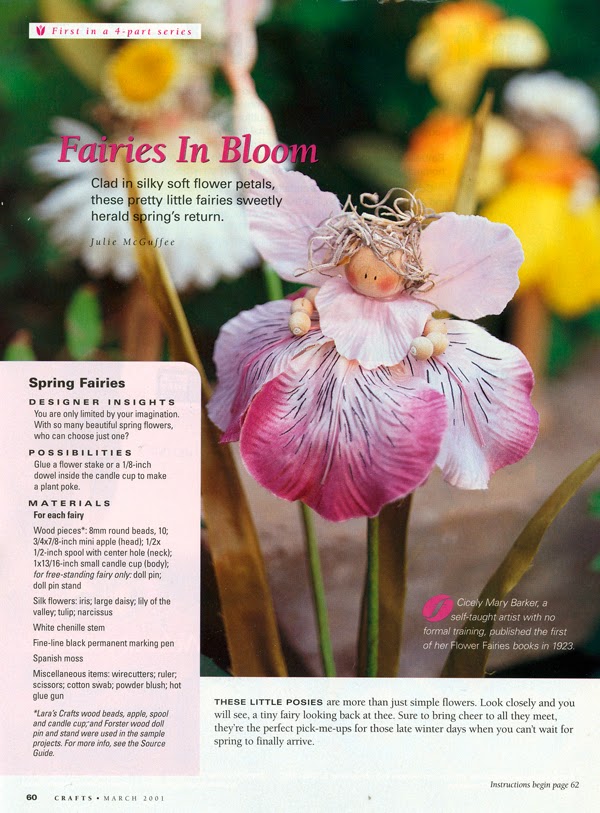 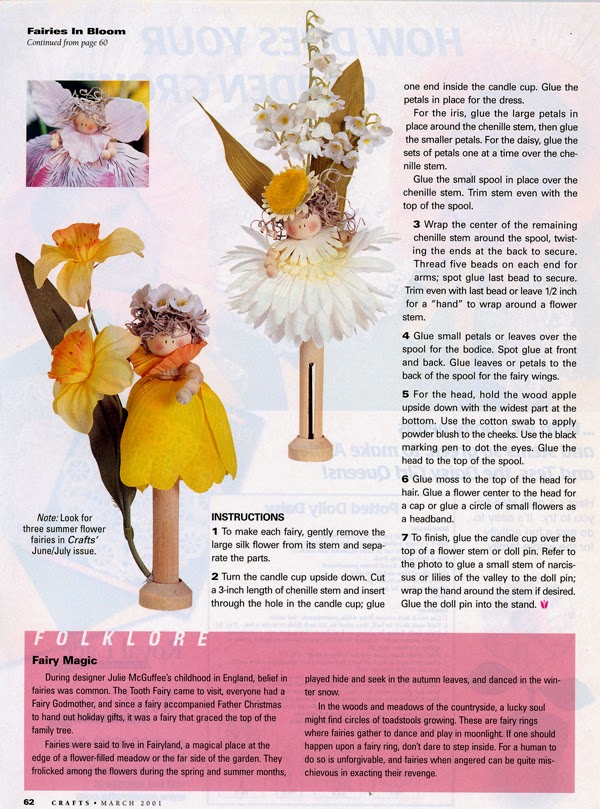 followed a few months later by the Summer Fairy projects: 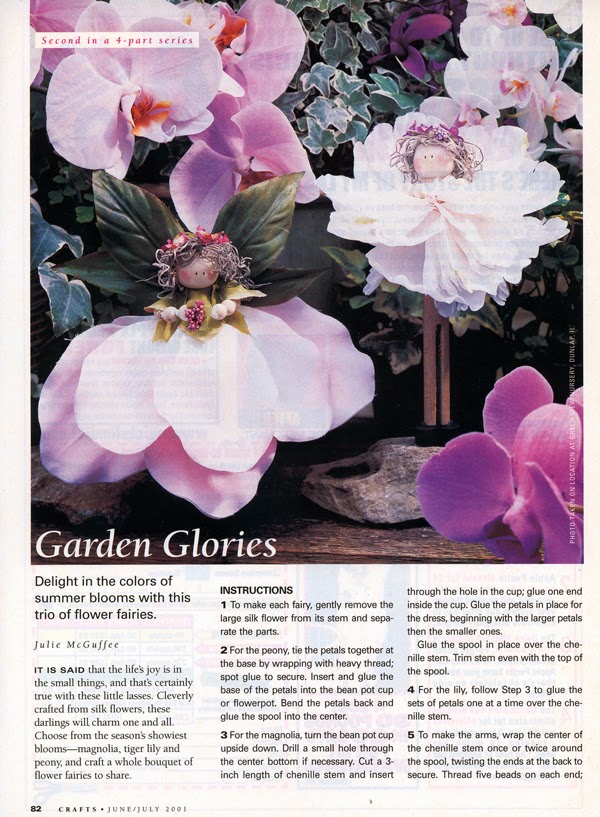 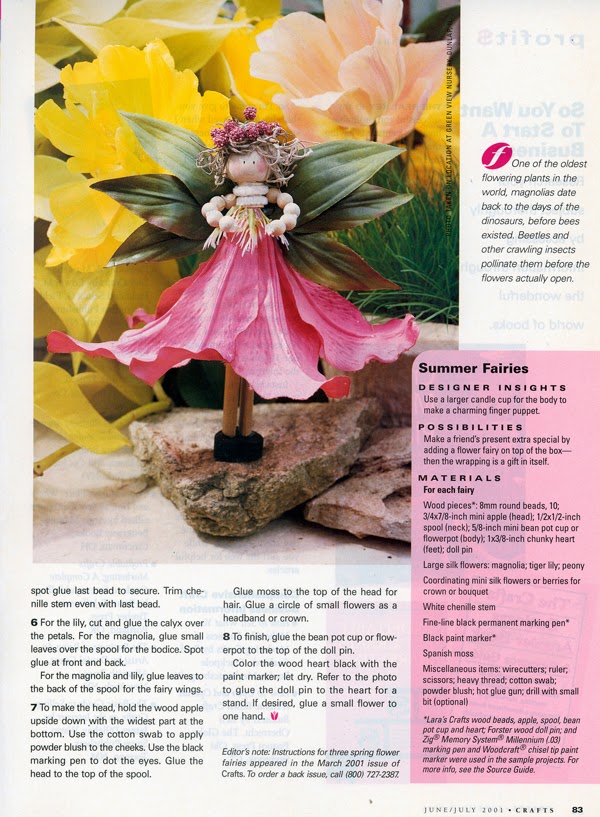 There were also fairies for Autumn and Winter.  I can share those later this year, but I think you'll have fun coming up with your own creations.  These were all created using seasonal silk flowers, doll pin and doll pin stands and tiny wooden beads threaded onto chenille stems for the arms.

I also featured a  "This Bud's For You" project in my Shoebox Crafts column for Craftworks magazine in July that year: 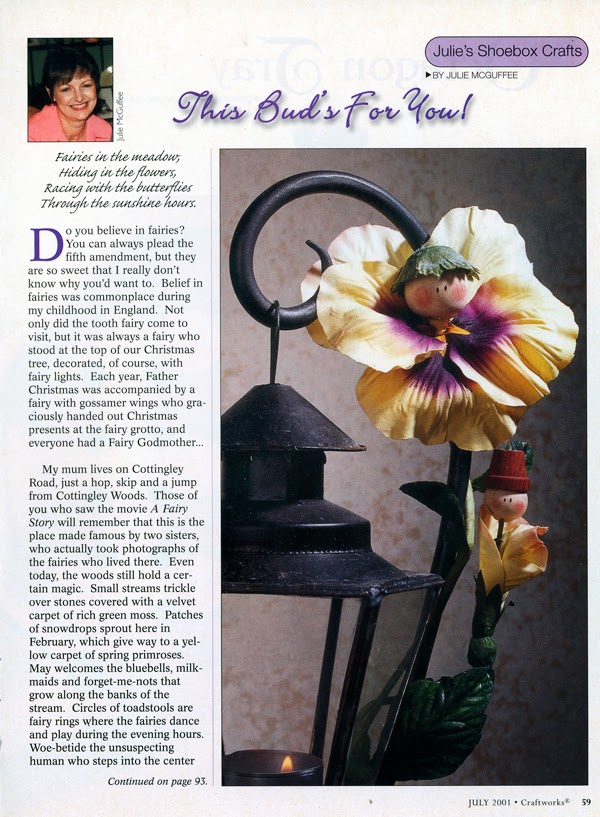 My granddaughter has a fairy garden in her back yard and we still search for evidence that the fairies come to visit "in the during of the night".....  but that was before they got a cat........

I still love fairy stories and often make little fairies for our Christmas tree each year.  I'll have to share those with you later this year.  Enjoy!  Y'all come back now..........

KEEP CALM AND CARRY ON CRAFTING!
Posted by Julie McGuffee at 2:10 PM