When my mother-in-law moved from her home to an independent living facility, I inherited her cherished Christmas cactus which she has had for a really, really long time. Needless to say, I'm a bit paranoid that it might die while in my care - which would definitely not be a good thing - so I check on it every day. I keep it outside on the patio in a corner by the bathroom door, to shield it from the winds and bring it inside in when it gets below freezing. 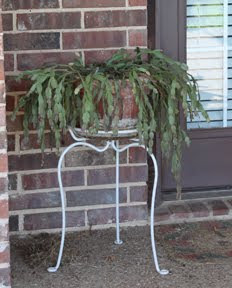 About 2 weeks ago I noticed there was a lot of dead grass and stuff on top of the soil, under the leaves/fronds or whatever they are. I carefully cleaned it out thinking the wind had whipped up dead grass and it had stuck in the the plant. About a week later there was another big bunch of dead grass and I cleaned it out again.......hmmm. A couple of days later a little of the grass was back, but this time I noticed it surrounded a dark hole and there - in the middle - was an egg! Lightbulb time.

After that, I check on the plant each morning and lo' and behold, a couple of days later there were 2 eggs, then 3, and this morning when I looked, there were 4!!!! 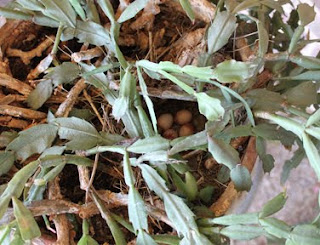 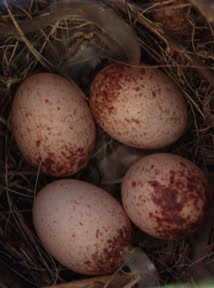 So yes, I plan on doing a "nest check" each morning. We've had nests around the house before, but this one will be so easy to photograph. I hope they all hatch. I've named them already, of course - John, Paul, George and Ringo - birds love beatles, right....... Hopefully she won't lay another egg tonight!